Quickstart Hue in Docker and query any of your Database

Query any Data Warehouse in minutes!

In this tutorial we configure Hue to use an existing MySQL database and point to an Apache Hive data warehouse that we want to query.

Note If you are looking another warehouse than Hive, check out all the other connectors.

There are two important concepts:

Let's pull and start the latest Hue container and open a shell inside it:

This puts us into the /usr/share/hue home folder of the Hue installation. Now let's open the configuration file:

First let's make sure that Hue is backed by a relational database supporting transactions like MySQL, PostgreSql or Oracle. Here we go with MySQL and fill-up the [[database]] section with the credentials:

Note An alternative way to boot a production ready Hue with its own MySQL database is to use the Docker compose.

Then, we add the following block to the [beeswax] and [notebook] sections so that we can query the Apache Hive instance running in one server we have access to. If you don't have a running HiveServer2, check the development quickstart that demoes how to boot one quickly with (Docker too ;):

Note As a bonus, feel free to also add a MySql interpreter pointing to the Hue database, it can queries itself with no issues:

Now from another terminal use docker ps to identify the Hue container id and commit its state to remember the configuration even after stopping it:

Note An alternative way of using docker commit is to keep the hue.ini configuration file outside of the docker image and simply mount it inside when starting the container as shown in the Docker How-to.

Now you can start the saved container which will expose the Hue interface on localhost:8888.

And that's it, now it is time to execute some SQL queries! 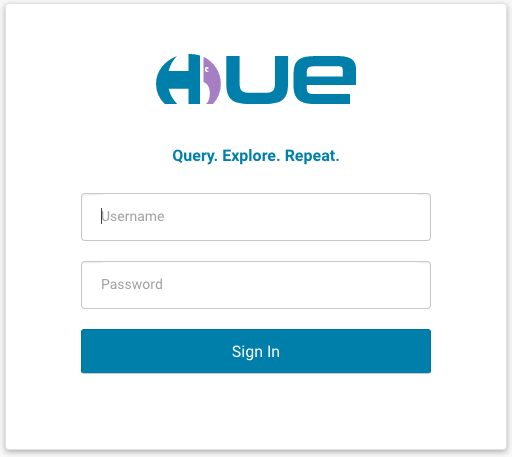 Any feedback? Feel free to comment here or on @gethue!

Romain from the Hue Team